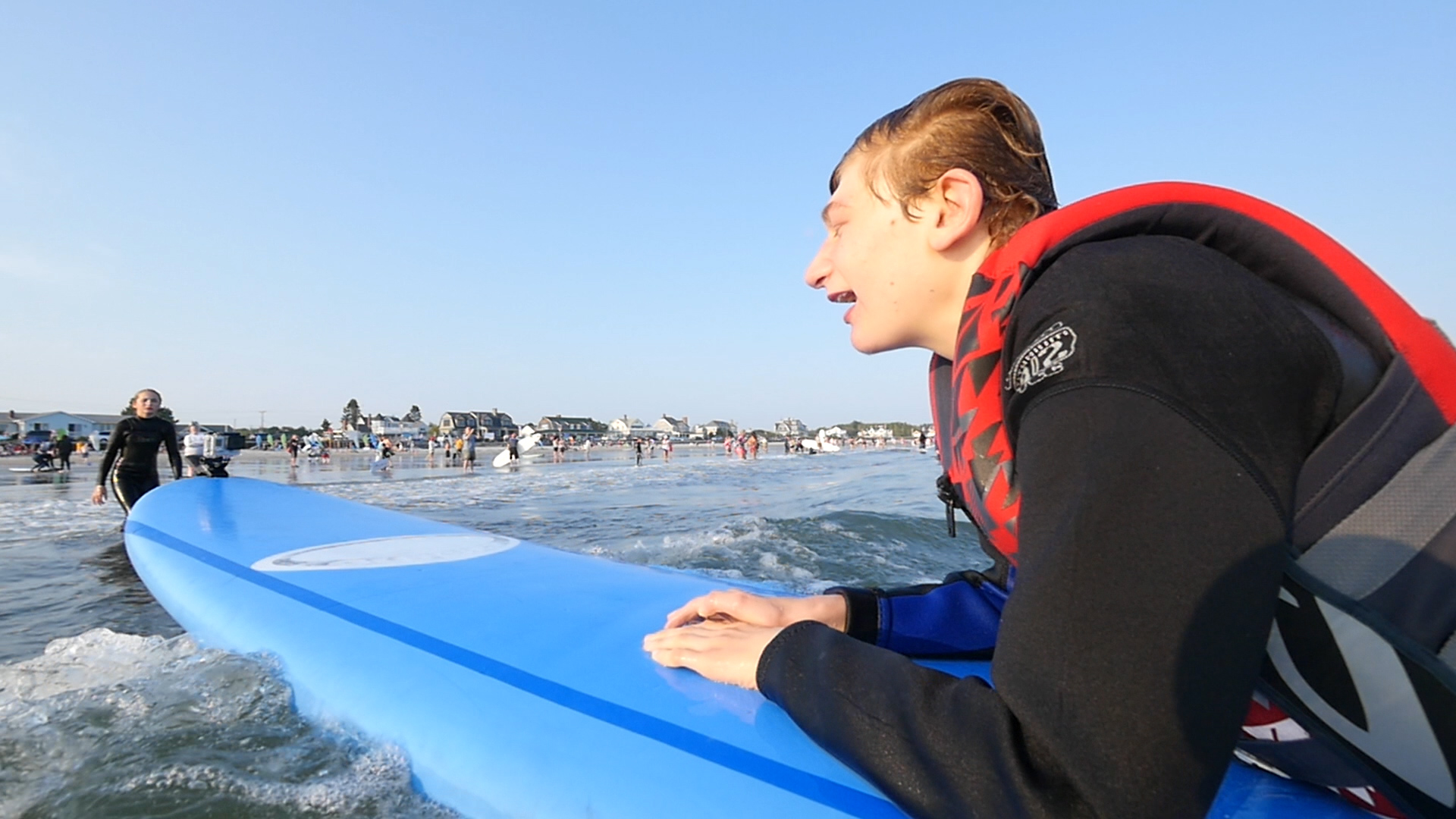 Maine waters open the world to young surfers in ‘Immersion’

For people with Down syndrome, autism and cerebral palsy, surfing can open up new worlds.
Photos courtesy of Benjamin Keller

For Portland filmmaker and lifelong surfer Benjamin Keller, taking to the Maine ocean isn’t merely recreation. It’s a way to reconnect with the world — especially for those who feel cut off from it by a disability.

“Being in the ocean, on a board, is one of the only places I can actually be present,” said Keller, whose documentary “Immersion” is screening on Thursday at 7 p.m. at the Nonantum Resort in Kennebunkport. “And for these kids, surfing has become a super important part of this world.”

The kids Keller is referring to are the subjects of his film, four young people in Maine dealing with afflictions such as Down syndrome, autism and cerebral palsy who take part in the nonprofit Special Surfers program (specialsurfer.org). Accompanied by program personnel and volunteers (from two to 20 of them, depending on each surfer’s needs), the children wet-suit up and experience what Keller maintains is not only a fun time at the beach, but a uniquely therapeutic one.

“I’ve been making surf documentaries for years,” said Keller, whose “BlueGreen” has been streamed on Netflix, “and when I heard about Special Surfers, I thought it was just sort of a fun thing for these kids. But it’s so much more than that.”

In “Immersion,” Keller, with the help of noted Maine doctor Thomas Reynolds (who’s featured in the film), learns that, for children whose disabilities have kept them isolated to various degrees, the surfing experience actually helps expand their lives in very specific ways.

“When you’re put on a board in the ocean, you’re floating, and you’re all of a sudden moving on every single axis,” he said. “These kids are taken out of the familiar space where they’ve learned their body exists to a totally different space.”

Citing his time surfing alongside his subjects and speaking to their families, Dr. Reynolds and Special Surfers staff, Keller explains that the evident joy these kids experience in the water comes from their brains processing life in this whole new way.

“Every time you learn something new or experience a new sensation, there are new pathways created in your brain,” Keller said. “It’s not healing, necessarily — these kids are dealing with some very serious issues. But it’s creating these new pathways for them and making them grow. All this amazing new experience floods their brains, everything from tasting the salt water to feeling the sensation of floating in salt water, which has a ‘floatiness’ you don’t get in fresh water. And just the experience of being at a beach packed with people when they usually have no access to these big social environments.”

A screenshot from “Immersion”

Keller, an avid surfer himself, also chalks up some of the power in the kids’ experience to Maine’s singular characteristics. “I’ve surfed at the well-known, big-wave places around the world, but Maine is comfort food, southern Maine in particular,” he said. “Our coastline doesn’t get a whole lot of giant waves, and the conditions can be pretty brutal here, but the rewards are amazing. When I come back here and go to a local break, there’s just a perfection, from the color to the water to the taste. Maine just feels unique.”

“Immersion” started out as Keller’s attempt to create a fundraising pitch for Special Surfers but has expanded to a longer film (24 minutes) that he plans to submit to film festivals, surf-centric and otherwise. The Kennebunkport screening, however, is all about helping out Special Surfers (and their special surfers), with all proceeds from the event going toward ensuring that Maine kids – of all abilities – get to experience the special freedom of a surfing adventure in the Maine ocean.

“Immersion” screens at 7 p.m. Thursday at the Nonantum Resort, 95 Ocean Ave., Kennebunkport. Tickets are $30 and include the film, speakers and hors d’oeuvres. A cash bar is available for those 21+. For more information about the screening, call (207) 967-4050, and for more information about Benjamin Keller and his company, Dubious Honor Productions, check out dubioushonor.com.